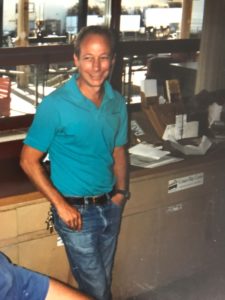 Larry Legere is known around the terminal as the “unofficial historian” of Casco Bay Lines. And with good reason.  Part of the organization for almost a third of Casco Bay Line’s history, Larry is the go-to guy whenever anyone has a burning question about something from our past. When asked about this observation, Larry just laughs and says, “I guess it’s true, and sort of weird. How many people work in the same place for so long?”

Larry has. He started working at Casco Bay Lines in June of 1973 as a deckhand. Four years later he had earned his Captains license, and he ran the boats full time until 1981. “I semi-retired then, went back to school and worked on deep sea tankers. It was funny though, whatever I was doing, I still found my way to Casco Bay Lines for whatever they needed me do to, tickets, maintenance, you name it.”

By 1990 Larry was back on board full time. He currently works as an Operations Agent in the pivotal role of shore side supervisor.  One such team member has to be on duty at all times, from 4:45 in the morning to after midnight, 365 days a year. Customer service is the name of the game. They oversee operations, put out fires, greet people and serve as the front line on the shore. It’s a job perfect for someone who knows the ins and outs as well as Larry.  “There’s a lot of experience between our team. There are a bunch of us have been here for a long time. We’re like a big family.”

In Larry’s case, it truly has been a family affair. His dad and all of his uncles worked at Casco Bay Lines growing up during WWII. In 1960, Larry’s dad returned to moonlight as a Captain and he would bring his son with him. Larry quickly grew to love it. As soon as he was old enough, he followed in his dad’s footsteps.

And the legacy continues. All three of Larry’s daughters worked at Casco Bay Lines while also working their way through high school and college.  “My middle one, Casey, met her future husband while working here,” Larry explains proudly. “This place taught them how to work hard, how to act around people, and how to treat to people.”

Larry has always loved getting to know our customers, generously sharing the rich history and his love for Casco Bay and the ferry line.  While he’s captained them all, he would most look forward to bringing people to Bailey Island every summer when the weather warmed up and the days got longer.  “I always enjoyed talking to these people from away who had never been out on the bay.” It’s a trip Larry’s dad also enjoyed back during the war.

And after all of these years, how would he describe it to someone? “It’s just a wonderful boat ride,” he says. “I’ve been all over the world on ships, and there are very few places as beautiful as Casco Bay. It’s unique. And I never get tired of going out on it. So I tell people that they have to experience it to understand.”

And he still sells cruises to visitors he chats with in the terminal. “People ask me all of the time what I recommend. I always tell them to take the Mailboat. Pick a beautiful day, any season, and go. We’re running on Christmas day, on Thanksgiving. And it’s beautiful then too.” Over the years, Larry looked forward to working on Thanksgiving, describing it as his own tradition of sorts, when he would get to see friends that would pass through just that once each year, on their way to visit their family on the island. “They expect to see me here. And I liked helping them get to be with their families.”

Somewhere along the way, Larry began collecting photos of the steamboats, reading everything he could get his hands on, making a point to talk to islanders and passengers older than him to soak up all of the history that he could. And, recently, he began making models of the old steamboats in his spare time.  One such model now lives at Maine Maritime Museum and another at the Long Island Historical Society.

And this week, after 44 years, Larry is retiring.

His plan? “I want to build more models. The last one I built took five winters. Now I’ll have more free time,” he says with a hearty and warm chuckle. And he’s excited to spend more time with his daughters and his wife (a former island girl he met while working at Casco Bay Lines). “I have so many good memories. If people here move on to other jobs, they always miss it and they come back – they stay part of the family.”

To us, Larry, you will always be part of this family. And we hope you can’t stay away completely. Fair winds and following seas!

From time to time on our blog we’ll be featuring stories of our fantastic crew to highlight their different roles, personalities, and connection to Casco Bay, our customers and our ferry line. If you have a particular staff member who you feel should be highlighted here, feel free to reach out to us!