Like so many of us around here, Philip Lee’s family has had a connection to the islands of Casco Bay for generations. With his artwork on display in our terminal, this connection can now continue for generations to come.

Over coffee on a sunny morning in August, Philip shares that his great grandfather, Henry Bailey, arrived on Little Chebeague with his family in 1897 to run the farm that occupied the west end of the island. Mr. Bailey also built and repaired wharves for the steamboats that served the bay back in those days, known more commonly as “steamers”. Throughout the late 19th century, tourists visited the islands of Casco Bay via steamer from Portland every summer and a tourism industry emerged. The hotel on Little Chebeague, the Waldo Hotel, was built in 1867 and had 90 rooms when it tragically burned to the ground on the Fourth of July in 1893.

During World War II, the United States Navy took over Little Chebeague for their sailors, and the residents had to move along. Philip’s family moved to Little Diamond Island where he and his wife continue to live today.

Philip recites the history of Little Chebeague, of the other islands, and of the many steamship companies that preceded Casco Bay Lines, casually and in great detail. But Philip’s true passion is for the steamboats themselves.

“I was always incredibly fascinated with them,” he recalls. “You’d have these great big wooden steamers. The sights, sounds, and smells were indelible – coal smoke, steam mixed with hot grease and oil, the rhythmic sound of the exposed parts leaping and turning as they performed their functions. Of course, engine rooms were on display then, only partially enclosed, and visible from the main deck. It was marvelous to watch the engineer and fireman tending the boilers and operating the machinery – adults and kids vied for viewing space at the rails!”

It’s not hard to imagine a young Philip Lee, much like the kids who visit the terminal now, with big eyes, wide-open, and one hundred questions about how the boats worked. As soon as he was old enough, Philip got a job as a deckhand. It was 1964 and he made $1.60 an hour. But he got to spend his time on the boats. The fleet at that time included the Berkley, captained by Earl Stockbridge. Captain Stockbridge had been with the company since before 1920 by then and was close friends with Philip’s grandfather, Lester Hill, who ran the freight shed. “Working with Captain Stockbridge was really special for me.” 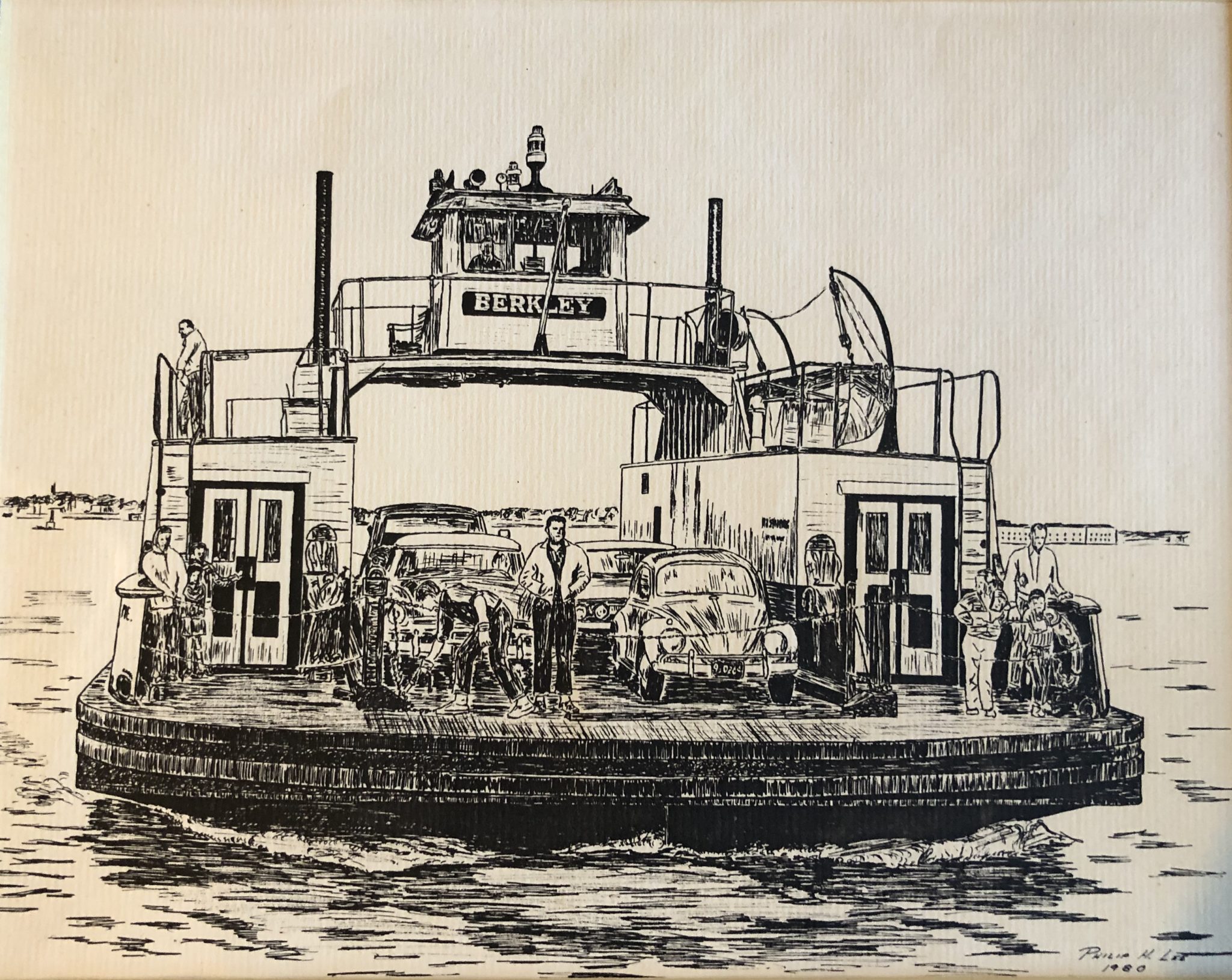 The details, the structure and the history of steamers in Portland’s Casco Bay further captured his imagination. He learned about the older steamboats that were no longer part of the fleet from the seasoned captains. He joined the New England chapter of the Steamship Historical Society. And, with no formal art training, he found himself sketching the vessels from photographs.

As he flips through an impressive portfolio of drawings, he tells me about the Berkeley (a car ferry that came up from Virginia around 1955 to replace the Narmada in service to Peaks Island – a “bell-boat”, it did not have pilot house engine controls so the skipper signaled the propulsion needs to the engineer down in the engine room), the original Machigonne (“a beautiful boat”), the Sabino (built in 1908 and still in service in Mystic, Connecticut), the Pilgrim (purchased in 1898, she could carry 1,000 people and ran until 1931). And on and on. The drawings are unbelievably detailed.

During his nine years on the Board, he continued his passion for preserving the history of his beloved steamers. He chaired the Operations Committee as the Board designed and built the Machigonne II. Larger engines, newer technology and safety requirements mean that the newer diesel-powered vessels look a little different than the vessels in Philip’s drawings. But he shares that he never lost sight of his connection to the original Machigonne.

While his artwork would be right at home in a gallery or museum, Philip is modest. He seems motivated only to preserve his memories of the steamers from the past. And when you look at his drawings, it’s hard not to feel transported to a different time and place. Lucky for us, we got our hands on two of his drawings and incorporated them into a mural in the new waiting area and ticket office completed in 2014.

Earlier this spring, he came down to visit us at the terminal and sign his artwork with his family watching nearby. He’s now made a mark on the history he enjoys so much. Next time you visit, be sure to look up and take a glance at some of the vessels from our past!

From time to time on our blog we’ll be featuring stories from island residents. Casco Bay Lines remains committed to fostering strong relationships with our island communities. If you have an interesting story, feel free to reach out to us.