On Tuesday, August 16th, Casco Bay Island Transit District held a ribbon cutting ceremony at the Casco Bay Lines Terminal to celebrate the substantial completion of the Terminal Renovation Project. Among attendance were Senator Susan Collins, the Deputy Regional Administrator of the Federal Transit Administration, and other project and community stakeholders.

The Casco Bay Island Transit District’s (CBITD) ferry terminal on the Maine State Pier was built in 1988 when Casco Bay Lines moved from its cramped location on Custom House Wharf. At that time, CBITD was serving a much smaller ridership; the waterfront was largely a working waterfront and the island populations were comprised of fishermen and mostly local residents. The major points of departure were Gates 1, 2, and 3 and the boats were between 65’ and 80’ in length.

Much changed between 1988 and 2011. By 2011, nearly one million people were using the ferry service each year, more than double the number the terminal was designed for in 1988. An additional 50,000 people flowed through the terminal each year, using the restrooms, visiting the Maine State Pier, and sightseeing along the waterfront. The amount of freight being handled by the ferries increased dramatically and vehicular traffic on the east

side of the terminal was congested all summer long. Island visitors that used to come only for the summer were now visiting during the fall and winter weekends as well. During this timeframe, much of the fleet was updated. These new vessels had greater capacity in order to better handle the increased traffic. The longer vessels, ranging from 100’ to 110’ in length, had an impact on the increasingly crowded pier and, even with the addition of Gate 4, there was little room for the fleet to adequately berth.

In the fall of 2011, using a variety of funding sources CBITD embarked on an RFP selection process to obtain a design team to evaluate the existing facility and make recommendations for changes that would enhance both operations and passenger experience. The primary 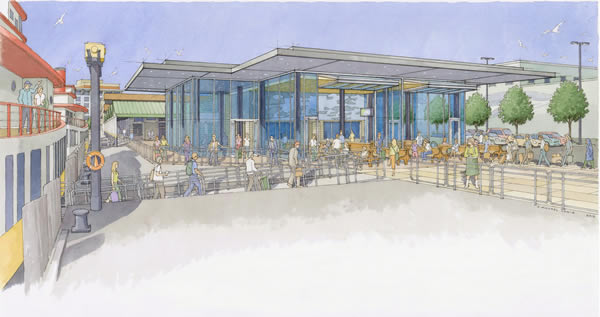 design team members selected were Scott Simons Architects; Fay, Spofford & Thorndike (now Stantec); and Woodard & Curran along with other sub-consultants to round out the effort. Their Phase I design included improvements to the car ferry berth, fender system rehabilitation and the addition of the new terminal waiting area and ticket office. Other opportunities for improvement were identified but not included in Phase I due to funding restrictions.

Phase I of the terminal renovation was substantially completed and the new waiting area and ticket office opened for business in August of 2014.

With support from U.S. Senators Collins and King, as well as U.S. Congresswoman Pingree, Casco Bay Lines was able to secure the necessary funding to advance the Phase II work.

Phase II work included adding a second floor over the existing administrative area, allowing many of the administrative activities to move up to open more space on the first floor to support operations and increased freight traffic. In addition to building expansion, the work re-conditioned much of the foundation system of the existing pier along with the potential to add length to the pier. This allowed for the realignment of some gates to better fit the current fleet and provided additional berth space. The site was also enhanced with changes to provide visitors with an improved experience as they arrive at the terminal, either on foot or in their vehicle. There is a dedicated sidewalk through the center of the site to improve ease of access and separate freight operations from pedestrian access. 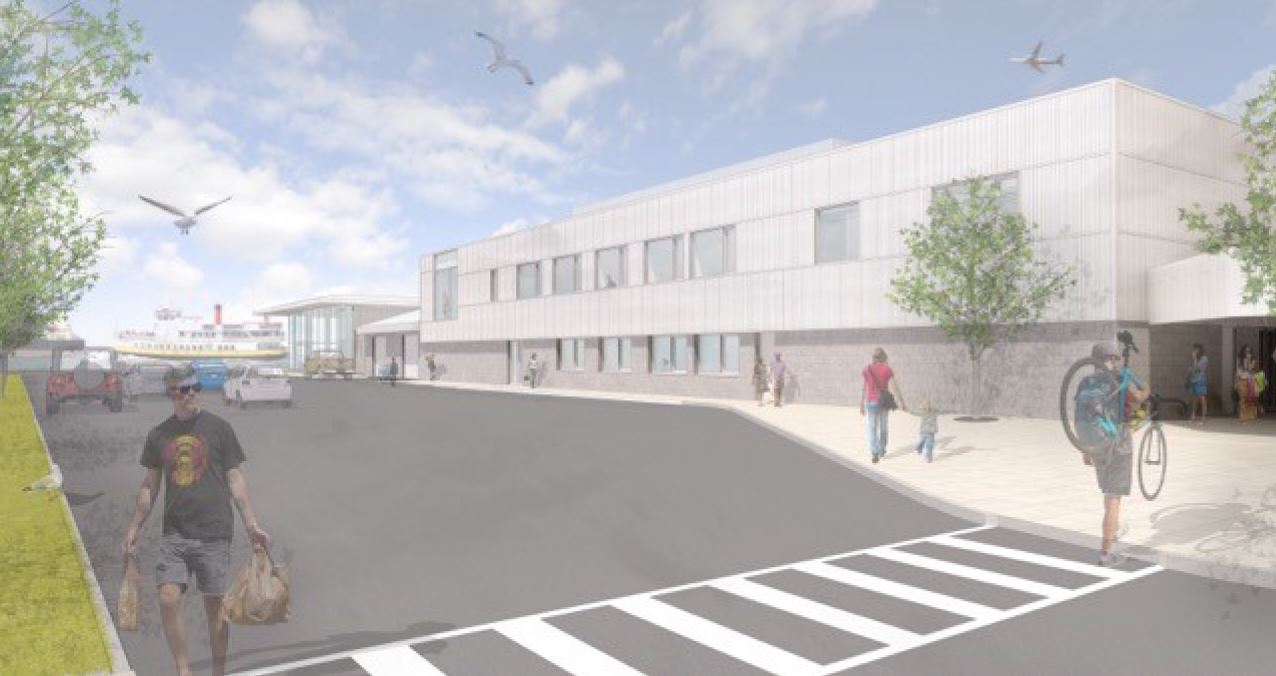 To further improve safety and manageability of the increasingly commingled passenger, freight and vehicle traffic, a third phase of terminal renovations was necessary to expand existing marine infrastructure and complete outstanding marine repairs.

On August 8, 2019, the Acting Administrator of the Federal Transit Administration, announced a $3.4 million grant for Casco Bay Lines from the terminal in Portland. With this final grant award, Casco Bay Lines was able to secure all necessary funding for Phase II and Phase III of this project.

Through an RFP process, Scott Simons Architects, Stantec and Woodard & Curran were again selected to lead the design effort. Detailed design plans can be found here.

Work completed in Phase III will improve embarkation and de-embarkation from several gates, increase passenger and freight queuing areas, and allow for the opportunity to explore side loading capability for the heavily used passenger/vehicle ferry and expanded covered waiting areas.

Together, these improvements were designed to enhance the overall long-term operational capabilities of the terminal. They are, however, restricted in their ability to address all current and future challenges by both the size and location of the property itself. In order to continue accommodating increased ridership and freight while providing a positive experience, Casco Bay lines depends on our dedicated and hardworking staff, as well as the patience and cooperation of all of our customers.