The dawning of a new year reinvigorates people – you make your resolutions for a better you, and set goals. This year our goal is to learn and share more about Casco Bay – its history, its islands, its visitors and those who call it home.

So, to start this year off right we decided to share the story of a Casco Bay “local” who is pretty near and dear to our heart …. and the story of the artist who created him. 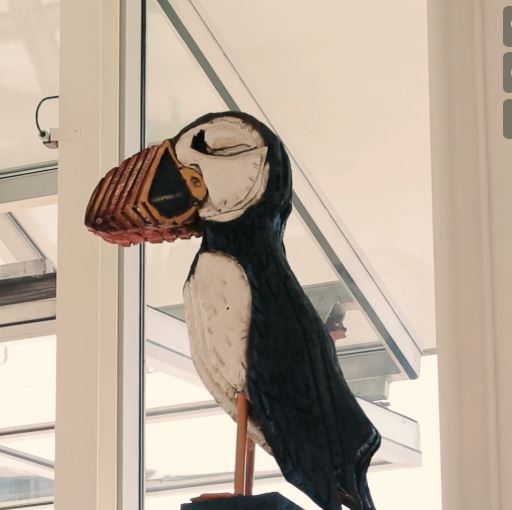 Puffin, created by Maine sculptor Bernard Langlais, is perched in the waiting area of our terminal. The sculpture came to us in February 2016, on loan from the City of Portland. Donated to the city by Ann Waldron, the colorful bird was to be placed in a prominent location where many could enjoy it.

According to The Langlais Trail – a cooperative made up of Colby College Museum of Art, the Kohler Foundation, and the communities and institutions that house Langlais’ work – Bernard Langlais was born in Old Town and traveled in pursuit of his art career – attending the Corcoran School of Art in Washington DC and later moving to New York City. But it was here in Maine that he developed his signature style.

After living away, he returned to Maine in the summer of 1956, when he renovated his summer cottage in Cushing and discovered he enjoyed creating mosaic-like pieces out of wood. His iconic style caught the eye of some New York art big-wigs, and soon his abstract wood reliefs were featured at the Whitney Museum, the Martha Jackson Gallery, and the Leo Castelli Gallery.

In the mid-60s he made his permanent home in Cushing and got to work constructing more than 65 wood sculptures on the land surrounding his home. Today, his works can be found across the state including several in Portland. Do you know where you can spot them?

The Portland Museum of Art host a collection of his works including an oil painting, five reliefs, six sculptures, and three works on paper.  The Portland International Airport is home to two pieces – Playing Bears and Acrobatic Dogs. All three Portland High Schools have a Birdhouse Head sculpture and the University of New England Gallery of Art is home to several works. Two Portland Public Library Branches – the Main Branch and the Peaks Island branch – are home to a Langlais original. Finally, our neighbors over at Ocean Gateway host Standing Bear, a sculpture created by Langlais in 1977.

We know Maine winters can feel oh so long. But we’re thinking it might be fun to start at Puffin and attempt a Bernard Langlais scavenger hunt around the city as the perfect antidote to cabin fever! Click here for a map!